Hi, I am “n0bisuke”. I work for dotstudio Co., Ltd.
I am a Web-system engineer and often use Node.js at work. When I heard Node.js runs on GR-ADZUKI, I decided to try making something with it.

Renesas GR-ADZUKI board is a dedicated version of an Arduino-like board, supporting a DC motor, servo, sensors (distance, acceleration, geomagnetism, etc.), and a battery box without any additional circuits. Here is the official site.

You can enjoy programming GR-ADZUKI with SA4, a derivative version of the Scratch application program which runs on various Arduino boards. You can also develop a sketch code with IDE4GR, the dedicated version of Arduino-IDE for GR-boards.

Since the SA4 firmware is pre-installed in the default set-up on GR-ADZUKI, you can run a Scratch code right after unpacking your purchase. Make sure you install the FTDI USB driver if you are using a Window PC.

GR- ADZUKI was proposed in “Robot Awaking Project” enabling anyone to be able to build a toy robot with no hassle.

When you use a breadboard and wires to build a toy robot, the robot’s sudden movements often rip wires out of the breadboard and eventually the robot breaks. To minimize these problems, terminals that can be fastened with a screw are also installed on GR-ADZUKI as default.

Of course, you can program a full-blown code with Arduino C++ language after enjoying Scratch programming. The GR-ADZUKI is ready for plug-in motors and sensors, enabling easy and quick toy robot development.

Johnny-Five is the JavaScript Robotics and IoT platform, and is based on Node.js for controlling a microcontroller system. The primary platform is Arduino boards. But now it is supported by many different boards including GR- ADZUKI, as described in this Japanese article : “Node.jsからGR-ADZUKIを動かそう! – Programming GR- ADZUKI with Node.js.” Now I would like to show you how to control GR-ADZUKI with Node.js. I am using following Mac system. Similar steps apply to Windows PC users as well.

First install “IDE for GR” on your Mac or PC. You can download here. I am using the Mac system so that I installed the Mac version of “IDE for GR 1.01”.

Double-click the downloaded dmg file and invoke the installer. Then drag and drop the IDE4GR icon in the Applications folder shown in the right side of the screen. After this, select the IDE4GR icon and invoke the application. If you see the following window, the installation is successfully completed. I think you’ll see that IDE4GR GUI looks like Arduino IDE.

Connect GR-ADZUKI to your Mac (or PC) via a micro USB cable. Then select the appropriate port from [TOOL] --> [Serial Port] --> /dev/cu.usbserial-XXXXX. The port number differs depending on each computer.  Search for the keyword “usbserial” to identify the corresponding port. If you cannot find the corresponding port, please refer to the section “What to do when you can’t find the port” described later. I encountered this problem when I connected the board. You must be patient and try it several times.

Next, you need to select Standard Firmata from [File] --> [Sketch Examples] --> [Firmata] --> StandardFirmata. 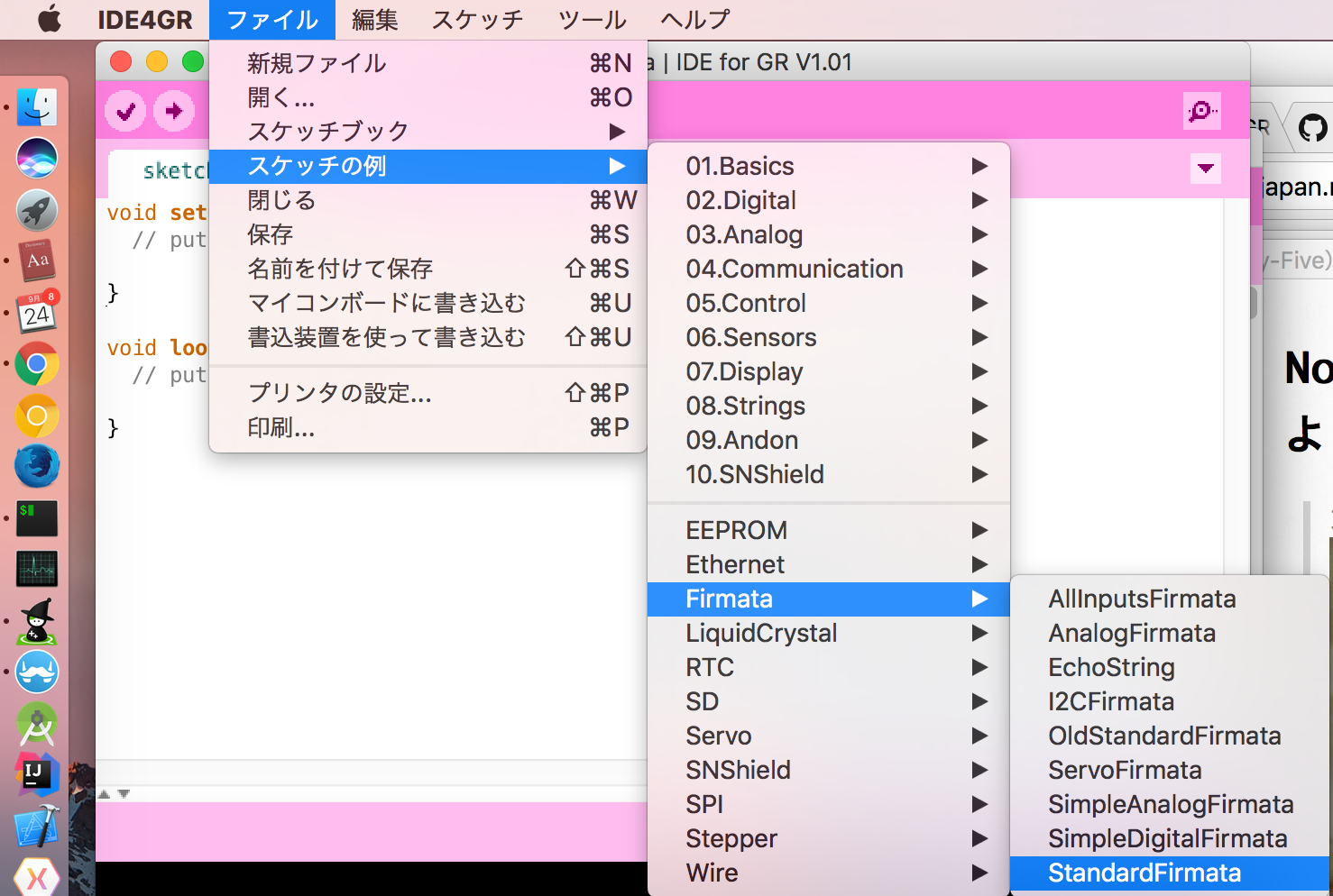 Then you will see the following code. Click the arrow icon marked by the red box shown below. This is how you will compile and write the code in your GR-ADZUKI board. Give the board few 10 or 20 seconds to compete his work. Do not unplug the USB cable, as you might break the MCU on the board. When you see the message “Completed writing the code on the board,” then the task is successful. When no USB port is found:

Sometimes, the Mac (or PC) does not recognize the board even though it is plugged in, resulting in no USB serial found. If you experience this trouble, please check the following:

Check that the slide-switch on GR-ADZUKI is set to “Sketch.”

You can see two slide switches on the board shown below. You must set the upper switch, next to the “GR” logo, to the “USB” side (left) and the bottom switch to the “Sketch” side (left). GR-ADZUKI is connected to the Mac (or PC) with a micro-USB cable:

The connection may be loose so that a contact-failure occurs somewhere inside the connector. Try re-plugging the cable again. Try switching the cable to a different USB port on the Mac or PC.

Sometimes my Mac rejects bad cables, and can’t find USB serial. Try using a port on the other side of the PC (which used less frequently). Some PCs don’t work with particular cables. Try replacing the USB cable to new one. In my case, as soon as I switched to a new cable, the problem was solved. (Ha ha!) We are going to start writing the Node.js code from now on, so if you have not installed the Node.js, please check this article (Japanese only). You should download the newest version from the official site.

Go to the folder you just made.

Prepare the package.json in the myproject folder, which is the starting point of the Node.js project. In many cases, npm int command is used for this task. The “package.json” and “package-lock.json” files are created with this command.

Install the library and set-up the program
Install Johnny-Five with the following command:

At this point, the myproject folder includes led.js, package.json, package-lock.json, and node_modules files. Now let’s execute the program. Before entering the command, make sure the bottom slide switch on GR-ADZUKI is set to the Scratch side.

As soon as you enter the $ node led.js command, the terminal screen on your PC shows the following messages:

LED #6 on GR-ADZUKI will start blinking. The official page indicates that LEDs on GR-ADZUKI are assigned to pins 6,9,10,11,12, and 13. Statement “new five.Led(6)” specifies LED on pin 6. If you modify this statement to the following statement, LED on pin 11 should start blinking instead of pin 6. Then your modification was successful.

When an error occurs

When you encounter the following errors, please check the switch position on the board. Make sure the switch is set to the Scratch side. Use a servo motor with GR-ADZUKI

I used the servo-motor “9g SG-90” which is indicated in the official site.
Please connect the servo-motor’s cables to GR-ADZUKI shown below.
When viewing the cables from the front, cables must be arranged in order of yellow, red, brown, from the left side. Add program servo.js to the folder of led.js. As the official site shows the servo-motor pin is assigned to pin 4, make the servo-motor statement as “new five.Servo(4)”. To execute the program, enter the following command:

Is it working?
I hope the motor turn properly. When I used the Arduino board to run a servo-motor, I got confused about where the cables should be connected. But GR-ADZUKI has dedicated pins just for the servo-motor, making life much easier!

By downloading the Firmata code to GR-ADZUKI, we could control the servo motor with Node.js. In addition, GR-ADZUKI provided a function that makes it easy to control a robot with optical sensors, DC motors, etc, I hope you try these sensors in the near future!

By using the Web-based language Node.js, it is easy to link to Web servers and integrate IoT devices. And I think it will be easier for Web-based engineers to get started with embedded applications.

Born in 1989. He served as an officer of IT venture company at Iwate Prefectural University.
After completing graduate school, he joined LIG Corporation as a web engineer and engaged in website developments. He started dotstudio Co., Ltd. in July 2016 and is active mainly in the IoT domain.
He serves as a board member of IoTLT, Japan's largest IoT community, and the JavaScript Robotics community NodeBots, and is an active evangelist of Milkcocoa, an IoT backend service.